This article summarizes when the U.S. federal government or its contractors may publicly release, as open source software (OSS), software developed with government funds.  This article is intended for non-lawyers, to help them understand the basic rules they must follow.

Before going further, a few definitions and warnings are necessary.  In this article, the term “government” means the U.S. federal government.  “You” means the government organization or contractor who wants to release software to the public as OSS.  “Releasing to the public as OSS” means (1) releasing the software source code to the general public (such as through a public website) and (2) giving its users the freedom to use it (for any purpose), study it, modify it, and redistribute it (modified or not)[1].  Note that these freedoms can be given by releasing the software under an OSS license,[2] or by releasing it without any copyright protection.  This article is not legal advice, and variations of specific facts can produce different results.  Also, note that government contracting is very different from commercial practices; do not presume that commercial practices apply.

To determine if you can release to the public some software developed with government funds as OSS, you must answer the following five questions:

1. What contract applies, what are its terms, and what decisions have been made?

2. Do you have the necessary copyright-related rights?

The following table shows the default copyright-related rights for common circumstances.  The first row is a special case, where a federal employee develops the software as part of his or her official duties.  Later rows discuss the typical impact of common data rights clauses from the Federal Acquisition Regulation (FAR) or the Department of Defense FAR Supplement (DFARS) (but note the dates): 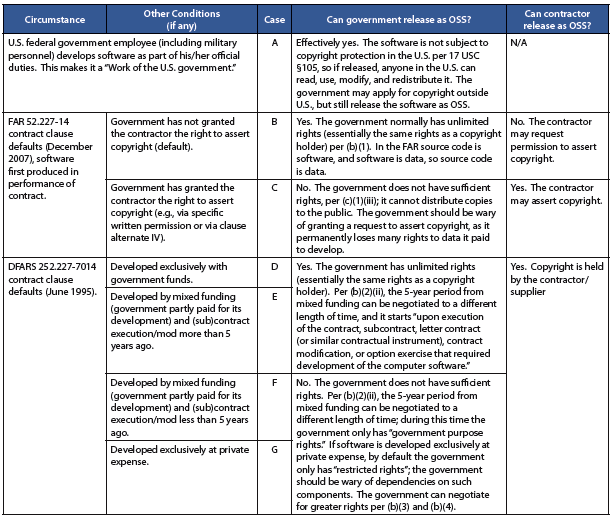 These are the general rules, but you must examine your specific circumstances to determine exactly what you can do.  There are details in the FAR and DFARS clauses not emphasized here, and the contract can change from these defaults to something very different.  Some contracts will use different versions of the FAR and DFARS clauses, so check to see if there are any relevant differences.  Note that some other agencies (like NASA) have FAR supplements, which are not covered here.

The government should be extremely wary of receiving less than unlimited rights for software or systems it paid to develop.  For example, some contractors will intentionally embed components over which they have exclusive control, and then design the rest of the system to depend on those components.  When the government has less than unlimited rights, it risks creating a dependency on a contractor, rendering competition for that system meaningless[6] and in some cases putting military capability at risk.[7] [8]

Some have misunderstood U.S. law and policy as requiring the government to mindlessly accept proposals which give less than unlimited rights for systems developed though government funding.  It is true that 10 U.S.C. §2320(a)(2)(F) states that “a contractor or subcontractor (or a prospective contractor or subcontractor) may not be required, as a condition of being responsive to a solicitation or as a condition for the award of a contract, to … sell or otherwise relinquish to the United States any rights in technical data [except in certain cases, and may not be required to ] refrain from offering to use, or from using, an item or process to which the contractor is entitled to restrict rights in data”[9].  However, this is not the whole story.  “If the Government has properly required certain data or software in a solicitation, it is entitled to certain rights in accordance with the statute and an offer failing to propose at least those rights could be held unacceptable.”  What is more, the government may (and should) evaluate proposals “on the basis of data rights and giving higher ratings to offerors willing to provide more than the bare minimum rights”[10]

Under many of the FAR (but not DFARS) clauses, if the government agrees to allow contractors to assert copyright, the government loses many of its rights, forever, to software that the government paid to develop (see rows B, C, L, and M).  This loss of rights can be quite detrimental to the government.  What’s more, it creates a difficult decision for a contracting officer to make, as the contracting officer must anticipate all possible future uses to make a good decision (something that is difficult in practice).  The usual DFARS clause (252.227-7014) avoids this problem; in this clause, typically the government ends up with unlimited rights to software it paid to develop (in some cases after a delay), and the contractor has copyright, enabling both parties to take actions such as releasing the software as OSS.

Here are a few notes about specific clauses:

This chart captures the tremendous breadth of applicable policies, some of which many cybersecurity professionals may not even be aware, in a helpful organizational scheme.

END_OF_DOCUMENT_TOKEN_TO_BE_REPLACED

A dynamic CSIAC SME, Senior Principal Cybersecurity Architect, Daksha Bhasker has 20 years of experience in the telecommunications services provider industry. She has worked in systems security design and architecture in production environments of carriers, often leading multidisciplinary teams for cybersecurity integration, from conception to delivery of complex technical solutions. As a CSIAC SME, Daksha's contributions include several published CSIAC Journal articles and a webinar presentation on the sophiscated architectures that phone carriers use to stop robocalls.

END_OF_DOCUMENT_TOKEN_TO_BE_REPLACED

Integration of Smart City Technologies to create Smart Bases for DoD will require due diligence with respect to the security of the data produced by Internet of Things (IOT) and Industrial Internet of Things (IIOT). This will increase more so with the rollout of 5G and increased automation "at the edge". Commercially, data will be moving to the cloud first, and then stored for process improvement analysis by end-users. As such, implementation of Secure Cloud Architectures is a must. This report provides some use cases and a description of a risk based approach to cloud data security. Clear understanding, adaptation, and implementation of a secure cloud framework will provide the military the means to make progress in becoming a smart military.

END_OF_DOCUMENT_TOKEN_TO_BE_REPLACED

This journal addresses a collection of modern security concerns that range from social media attacks and internet-connected devices to a hypothetical defense strategy for private sector entities.

END_OF_DOCUMENT_TOKEN_TO_BE_REPLACED

This Special Edition of the CSIAC Journal highlights a broad array of modeling and simulation contributions – whether in training, testing, experimentation, research, engineering, or other endeavors.

END_OF_DOCUMENT_TOKEN_TO_BE_REPLACED

This edition of the CSIAC Journal focuses on the topic of cybersecurity of Cyber-Physical Systems (CPS), particularly those that make up Critical Infrastructure (CI).

END_OF_DOCUMENT_TOKEN_TO_BE_REPLACED

The CSIAC is a DoD-sponsored Center of Excellence in the fields of Cybersecurity, Software Engineering, Modeling & Simulation, and Knowledge Management & Information Sharing. END_OF_DOCUMENT_TOKEN_TO_BE_REPLACED

END_OF_DOCUMENT_TOKEN_TO_BE_REPLACED

This website uses cookies to improve your experience while you navigate through the website. Out of these, the cookies that are categorized as necessary are stored on your browser as they are essential for the working of basic functionalities of the website. We also use third-party cookies that help us analyze and understand how you use this website. These cookies will be stored in your browser only with your consent. You also have the option to opt-out of these cookies. But opting out of some of these cookies may affect your browsing experience.
Necessary Always Enabled

Any cookies that may not be particularly necessary for the website to function and is used specifically to collect user personal data via analytics, ads, other embedded contents are termed as non-necessary cookies. It is mandatory to procure user consent prior to running these cookies on your website.